From Anura Sims Database
Jump to navigation Jump to search

The original Valkyrie, the Mark I, was intended to replace the aging fleet of Peregrine-class fighters currently in use throughout the fleet. Smaller and more agile, Valkyrie-class fighters were used for a variety of missions. Unlike the Peregrine-class, the Valkyrie was intended to be used in small groups, which made it ideal for fighter wing groups.

Initially, the design of MK I proved successful, with a high survivability rate matching the heavy fire power available to bring down larger ships. In learning that a full squadron of Valkyries would still require a lot of support for engagements of a Dominion War level threat, Starfleet deemed that the attack fighter needed an upgrade. By 2387, these fighters were still being deployed in fairly limited numbers - shuffled around the fleet based on need and priority.

The Gryphon class fighter owes much of its design to its predecessor, the Valkyrie class fighter. In fact, the Gryphon was also known as the Valkyrie MK II. The fighter is now entering full service with Starfleet and squadrons are being assigned to the newest ships coming out of the yards, including the Century class vessels. The Gryphon is designed to function in a multitude of environments as well as roles. To be capable in all the varied conditions, the systems are designed with flexibility, versatility, and stability in mind. This new fighter includes upgrades to the nacelles for faster maximum and emergency warp ratings, improved pulse phasers, and stronger shields among others.

The first step was to increase the command, control, and reconnaissance capabilities of the design. Originally, the Valkyrie employed an isolinear twin-core design computer system, with 372 isolinear banks and 106 command pre-processors and data analysis units. This design was quite successful for the use of standard comm traffic control and tactical targeting, but newer sensor package upgrades intended for the Valkyrie were hampered by a core that was already at its limit for processing power.

A new five module bio-neural gel pack core design was implemented. Utilizing the bio-neural technology, processors and relays, the original space frame needed for the computer systems was reduced and spread out through the center-line of the craft. Computational capacity and storage was increased by another 30%, and a new tactical link-up library software system was implemented. The system provided a clearer and more accurate battlefield image for the pilot.

Their new, sportier look reduced sensor cross-section and improved warp field stability. With the hull redesign came minor changes to weapons load-out: the arrangement of the Type XI Pulse Phaser Cannons, while the technology was the same as the Mk II, as an upgrade, the warp drive plasma conduit ran through the primary phaser coupling to double the power of the Mk II’s phaser cannons. There were pulse or beam firing options available and bolts had a firing rate of 5 per second. The beam setting had lower yield but longer range. The microtorpedo launchers in the Mk II changed only slightly to fit into the new spaceframe.

An ECM Pod/ECCM Emitter was installed in the rear of the fighters. ECM (Electric Counter Measure) was essentially a micro torpedo full of shrapnel and debris with the given craft's transponder signature and sensor reading. It confused the enemy ordinance and caused it to think the cloud of debris was the target. ECCM (Electric Chemical Counter Measure) creates a wake similar to a warp, impulse, or thruster engine's wake, fooling such a guided missile into a false lock.

An Advanced Tactical Sensor Suite was also added to the dorsal area of the Gryphon. This increased the targeting capabilities along with giving the fighter the ability to target specific subsystems. The Gryphon also features a low-powered tractor beam system. This allows the Valkyrie to be used to retrieve escape pods, small pieces of cargo, and allows it to tow other fighters back to the base of operations. Among the improvements for the Valkyrie Mk II were a new ablative armor compound, and an improved power plant.

Although, the Gryphon has space for a Tactical Security Officer (TSO) in the backseat, they are not employed on the USS Black Hawk. 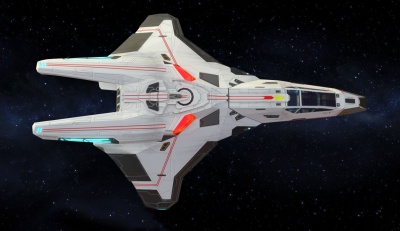 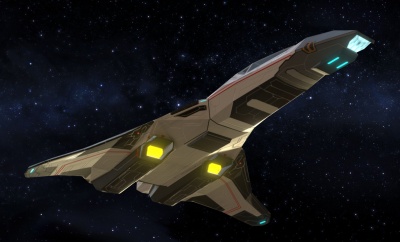