From Anura Sims Database
Jump to navigation Jump to search

The Hadyn Nebula, commonly known as Gamma's Bermuda Triangle, is located between the Valara System and the Kendi System in the Gamma Quadrant.

In 2372, the USS Cochrane became the first Federation starship to encounter the nebula. The Cochrane was unable to study the nebula beyond a high-fidelity scan and left several Class Two probes behind to collect more data. When the USS Karnack arrived several weeks later, none of the probes were to be found. It did detect unusual gravimetric readings at the heart of the nebula. Unfortunately, a passing Dominion patrol forced the Karnack to flee. Other than a few stolen opportunities for scans, Starfleet knows very little about the nebula. 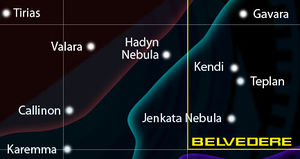 Location of the Hadyn Nebula

The nebula boasts several Mutura-like properties, but on a stronger scale. If a ship finds itself inside, sensors and shields will be left non-functional. Shipboard phasers will see their effective range reduced by 75 percent. Navigational systems will be spotty at best, requiring the ship to utilize visual scanning.